Save $200 off your entire purchase! Get your free quote
Blog

Residents of the northeastern United States aren’t used to powerful hurricanes. But Hurricane Sandy came ashore in late October of 2012 and inflicted massive amounts of damage while killing over ten dozen people. Not surprisingly, the storm pounded roofs and gutters of homes and buildings all around the region.

Connecticut received quite a bit of storm damage as this home’s “peeled-off” gutter demonstrates. Governor Bob Malloy did declare a state of emergency before Sandy hit and ordered partial evacuations across the state. Just before the superstorm arrived, Malloy closed all major highways to non-emergency vehicles — the first time that such an order had been issued in Connecticut since 1978.

Many of Connecticut’s older, more stately homes also incurred significant damage from Hurricane Sandy. This tree toppled onto this home’s porch, flattening one entire side — and it appears to have struck the house’s roof on its way down. You can see the bent gutter pinned underneath the larger portion of the tree.

Maryland was another state that bore the brunt of Sandy. Even though these limbs weren’t all that large, they were strong enough to take down the gutter of this home north of Baltimore. Baltimore itself dodged most of the storm’s fury, but the rest of the state didn’t fare as well. Roads became impassable, flooding spread across the state, and a power outage caused millions of gallons of raw sewage to flow into the Little Patuxent River.

The blogger who lives in this New Jersey home will have to fork over some money for gutter replacement, but not much else. And he/she was one of the lucky ones. Millions of people lost power for varying lengths of time, and 23 people in the state died as a result of Sandy. Governor Chris Christie referred to the damage as “incalculable.” 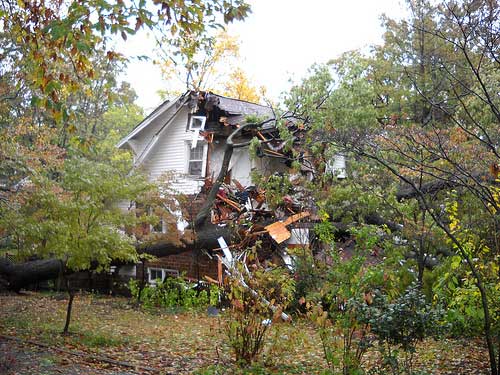 The state of Virginia was largely spared by Hurricane Sandy, but don’t tell that to the owners of this Arlington home. Falling trees punched a hole in the second-story roof, almost destroyed the roof of the porch, and separated gutters from their rooflines (as seen in the foreground).

It’s hard to fathom how storms can uproot huge trees, but this photo provides evidence of a backyard tree crashing onto the roof of this two-story Pottstown home in Montgomery County, Pennsylvania. Damage was widespread across Pennsylvania, with some 1.2 million people losing power and 14 individuals losing their lives.

Perhaps the hardest-hit region by Hurricane Sandy was New York’s five boroughs. Many residents in the Lower East Side of Manhattan went without electricity for over two weeks. There were also allegations of subpar rescuer response in the outlying boroughs like Staten Island, where this A-frame home sustained substantial roof damage.

A restaurant in Massachusetts got some of its roof peeled off by Sandy’s strong winds. Although total property losses from the storm are expected to fall between $7 billion and $15 billion, the short-term damage to the economy (as measured by lost sales and commerce) could add to that total. It should be noted that experts believe that Sandy won’t cripple the region’s economy in the long term.