Save $200 off your entire purchase! Get your free quote
Blog 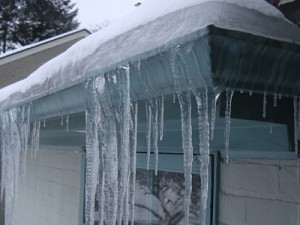 In those regions of the country that are subject to significant amounts of snowfall and extended periods of freezing temperatures, many homes are damaged by a phenomenon known as ice damming. An ice dam is a ridge of ice that prevents snowmelt from draining off the roof. The cause is heat from a home’s interior that rises to the roof deck and melts the snow above. That melting snow then flows down to the colder, lower portion of the roof and refreezes, forming a dam, while more snowmelt backs up behind the ice dam.

If left unchecked, that dammed water can then leak into the home, causing damage to ceilings, walls, floors, insulation and more – just when conditions outside are the worst for repairs. In most areas, ice dams occur from late December through late February.

There are certain areas of a roof that are more prone to ice damming than others. Escaping heat is the root cause of ice dams, so you won’t find one over unheated areas such as garages and porches.

How to Stop Ice Damming

A simple solution to counter the formation of ice dams is to install Helmet Heat® in your Gutter Helmet® gutter protection system. Helmet Heat® gutter heating systems automatically warm up when the weather outside turns cold, so ice dams never have a chance to form along the eaves and in gutters. When installed by a professional, Helmet Heat® can prevent severe damage to your home caused by ice dams. Learn more about this innovative gutter heating system.